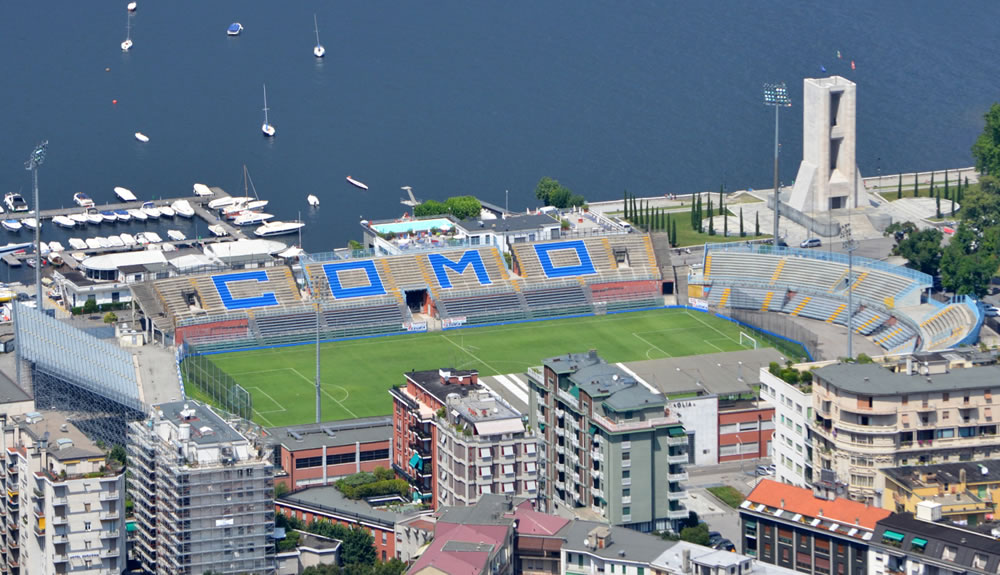 The Giuseppe Sinigaglia Stadium in Como

The Giuseppe Sinigaglia stadium rises in the city of Como on the shore of the lake. Designed by Giuseppe Terragni, it stands between the gardens of the Voltiano Temple and the Aero Club Como hangar, the Lario Canottieri faces the distinct sector and the Novocomum , near the central tribune.

Giovanni Greppi was entrusted with the project to build the stadium at the behest of Benito Mussolini. The Giuseppe Sinigaglia stadium was one of the first examples of rationalist architecture in Italy and was dedicated to the rowing champion Giuseppe Sinigaglia, who fell in the First World War.

The capacity of the stadium is 13.602 spectators, which reached 18,000 during the Serie A period of the Como team. From the distinct sector curves it is possible to admire Lake Como directly. The covered grandstand was demolished to be rebuilt in 1990. The same fate happened after the separate sector in the 90s and the house curve with an innocent pipe structure. In 2003-2004 the guest curve was rebuilt, passing from the larger concrete structure.

On the occasion of the Voltiane celebrations of 1927 it was decided to build the Como stadium. The works began in 1926 on the land donated by the Podestà Baragiola and designed by the architect Giovanni Greppi of Milan. The stadium was equipped with a 500 meter cycle track and a 450 meter track, the football field of about 7200 square meters could accommodate 6000 people. Opera of pride of the city of Como and fascism was praised by the president of CONI Lando Ferretti in his visit of 1927. The stadium was inaugurated on July 30, 1927 and in that same year the first cycling olympics were held on the track, the gymnastics ones and international soccer competitions.